Match day eight in the Nigeria National League (NNL) 2022 season saw us host Warri side, J.Atete FC as we hoped to bounce back from the last defeat to Adoration FC in Enugu.

Coach Abiodun was back on the sidelines and he didn’t make too many changes from the team that lost in Enugu.

Salami Farouk returned to the starting line up, Gabriel Adewara and Tosin Oyedokun were given deserved rest and Odibo retained his place despite exiting the previous game before half time, due to injury.

The first half was really quiet at the start, loose balls flying around until we took control of the game. We dominated possession but the final balls were not connecting.

Off the run of play, Paul was called into action as a quick counter from the visitors presented a chance which the attacker hit very well but the goalkeeper responded with an even better save, to keep the score leveled at half time.

The second half resumed with much aggression as we began to press for a goal.

Olubode Hassan and Henry came on for Waliu and Damola as we continued to search for a goal.

Hassan again for the second game running proved an important figure, taking players on and eventually linked up beautifully with Waliu for a chance but his strike was straight at the keeper.

Later, it was Farouk’s turn to test the keeper as a clearance in the box fell to him but the young striker, hurried his strike and could only hit straight at the keeper.

The tension in the crowd and on the pitch became increasingly obvious, as the visitors tried to milk every second, shouts for penalty from fans of the hosts erupted as the game was tense in the box of Atete, but time would run out and it was a share of the spoils.

The Oga Boys will be on the road to face Ibom youths of Uyo, in Matchday nine of the NNL, on Saturday, 2nd April 2022.

The Lagos State NNL Pre Season tournament continued on Thursday at the Teslim Balogun Stadium with two games. The… 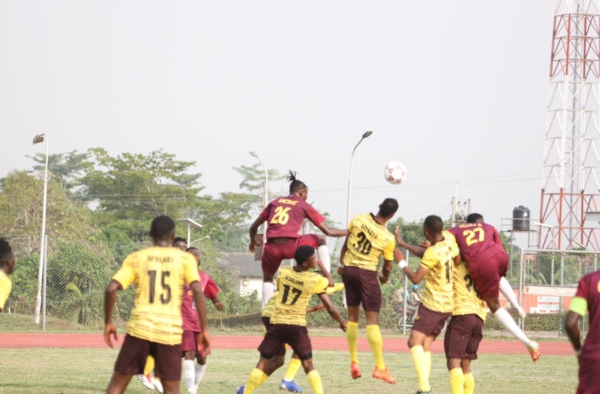